The Vatican Archives on Pius XII to be Opened, PDF format

Francis I Announces the Opening of the Files on Pius XII

It was a long-awaited announcement.  On 4 March 2019 the pope of Rome, Francis I, said:

“I have decided that the opening of the Vatican Archives for the Pontificate of Pius XII will take place on 2 March 2020, exactly one year after the eightieth anniversary of the election to the See of Peter of Eugenio Pacelli.”[1] END_OF_DOCUMENT_TOKEN_TO_BE_REPLACED

During his visit to Croatia in June this year, the pope of Rome, Benedict XVI, prayed at the tomb of Alojzije Stepinac, a Croatian Roman Catholic cardinal who was archbishop of Zagreb from 1937 to 1960. And he encouraged Croatian Roman Catholics to look to Stepinac, who has been declared “Blessed” by the Papacy, as a model “of apostolic zeal and Christian fortitude.” 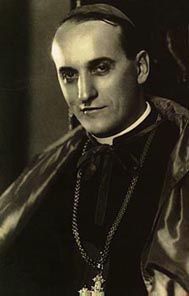 At first glance, most would see nothing remarkable, and certainly nothing sinister, in this. But they would be very, very mistaken. Who was this man, Stepinac? END_OF_DOCUMENT_TOKEN_TO_BE_REPLACED