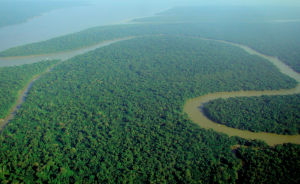 The Vatican’s Synod of Bishops for the Pan-Amazon Region met in Rome for three weeks in October 2019.  The theme: “Amazonia: New Pathways for the Church and for an Integral Ecology.”  Present were Roman Catholic bishops, missionaries, representatives of the native peoples of Amazonia, and others.

But the big question is: Why?  Why suddenly this huge interest in the Amazon region?  How come a major Vatican synod was devoted to this remote area of the world, mostly jungle, inhabited by primitive tribes scattered over a vast area?

Conservative Roman Catholics were very suspicious.  And with good reason.  Francis I is a Jesuit under orders, as all Jesuits are.  A Jesuit under absolute obedience to his master, the Jesuit general (the “black pope”).  And the Jesuits are devoted to a liberal/Socialist/Marxist agenda, and to swinging the Papal system away from its traditional position on various issues to radically different ones.  It is not at all surprising, therefore, that with a Jesuit at the helm the entire Roman Catholic institution is being pushed inexorably towards one-world Marxism.  And radical environmentalism is being used as a major tool to deceive the world into accepting a one-world, Vatican-controlled government.

The most important objective for the Amazon Synod was to push Francis’ radical, pagan Green theology for the earth.  Not because of any great concern he has for the earth, but because it is the best means to bring about the Vatican’s long-desired world government.

In a previous article, The Papacy’s Sinister “Green” Agenda, I wrote: “long ago the Reds realised that if they became Greens, they could achieve many of Communism’s goals by another means.  And they are succeeding worldwide.”  “The Vatican has alligned itself to the radical global environmentalist agenda.  For decades it has been working hand in hand with Communism, so this is not surprising.  And under Francis I it has massively accelerated its involvement in ‘Green’ issues, all for the purpose of accumulating ever more power.”[1]

In January 2018 Francis met with over 2000 Amazonian Indians in Peru, told them the Amazon was “holy ground”, and that they and the Amazon region were important to the Roman Catholic “Church” and to the whole world.[2]  The whole world?  What was he getting at?  The average person, living in any other part of the world, does not give the Amazon a second’s thought from one year to the next!

Francis said this because he and his Jesuit Order plan to use the Amazon region as a giant experiment!  What has been decided concerning the Amazon is not solely about the Amazon.  It is about what Rome wants for the whole world.  The Amazon is the experiment, and the Amazonian Indians are the unwitting lab rats. 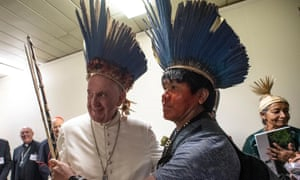 The “Pact of the Catacombs”

Around the time of the Second Vatican Council in the 1960s, a group of Socialist bishops signed a secret manifesto.  It was called the Pact of the Catacombs, having been signed near the catacombs in Rome.  They pledged to politicise the Roman Catholic institution along Socialist/Communist lines, so as to usher in the “advent of another social order.”  Bottom line: Rome was to be Communised.  It was to support the creation of a Communist world.

When Jorge Bergoglio became the first Jesuit pope, Francis I, in 2013, those who supported the Catacomb Pact were ecstatic.  German cardinal, Walter Kasper, said that Francis’ election was a vindication of the Pact, for now the “Church” of Rome finally had a Socialist pope.  “It [the Catacomb Pact] was forgotten,” he said.  “But now [Francis] brings it back…. His program is to a high degree what the Catacomb Pact was.”[3]

One of the signers of the Pact was Brazilian archbishop, Hélder Câmara, a radical Socialist.  This man gave his support to priests who joined armed revolutions, saying: “I respect priests with rifles on their shoulders; I never said that to use weapons against an oppressor is immoral or anti-Christian.”[4]  Yet in 2015 Francis I approved a request for the “canonisation” process to begin for Câmara!  Francis greatly admires this evil man.

“Câmara’s name has been on the lips of many Amazon Synod participants.  Nicknamed the ‘red’ bishop, he was the perfect forerunner of Jorge Bergoglio, combining modernist theology with radical politics.  Camara supported divorce and remarriage, women priests, and once described the Church’s prohibition on contraceptives as ‘an error destined to torture wives and to disturb the peace of many homes.’  He played a leading role in the politicization of the Latin American bishops, pushing them to embrace socialist liberation theology”.[5]  These are all causes dear to the heart of the Jesuit pope.