Communism was not defeated by the War, however.  If it had been, we may be sure the Vatican would then have claimed that Pius XII’s consecration of Russia was valid.  But Communism expanded after World War Two, all over the world.  The time was not yet ripe, therefore, to claim that Fatima’s “second secret” had been fulfilled.

The Vatican’s Second Hope: The “Conversion” of Russia by American Nuclear Defeat of the USSR

If anyone thought the Fatima cult would die down after the failure to defeat Communism in World War Two, they were in for a huge surprise.  It was revived in a big way in 1945, with massive pilgrimages being organised to the shrine of Fatima itself.  And then in 1946, the idol of “Mary” was solemnly crowned in front of over half a million pilgrims.  The crown weighed 1200 grams of gold, it had 313 pearls, 1250 precious stones, and 1400 diamonds.  Pius XII broadcast a radio message from the Vatican on the anniversary of Fatima on 13 May 1946, calling on the faithful to “Be ready!  There can be no neutrals.  Never step back.  Line up as crusaders!”[34]  Rome was far from done with Fatima.  Or with Russia.

The Cold War began in 1947, and the Vatican encouraged massive hatred of Russia.  It also sent an idol of “Our Lady of Fatima” on a world tour (called a “pilgrimage”), being taken to over 50 countries, welcomed by governments and adored by multitudes.  Wherever the idol went, Romanists were aroused to a frenzy of anti-Russian hatred.  Finally, in 1950 the idol was sent to Moscow itself!  And with the warm approval of the American ambassador, Admiral Kirk, the idol was solemnly set up in the church of the foreign diplomats – “To wait for the imminent liberation of Soviet Russia.”

Yes, the Vatican was still hoping that Russia’s “conversion” was about to be achieved, militarily.  Prominent Roman Catholics were urging Americans to prepare for a nuclear war with Russia.  The Cold War tension mounted dramatically.  In 1950 the Roman Catholic Secretary of the U.S. Navy, F. Matthews, called on the U.S. to launch an attack on Soviet Russia.  In this call this fanatical, devout Papist was fully supported by the Roman Catholic hierarchy, the Roman Catholic press, and the Knights of Columbus, a powerful American Roman Catholic order.

The calls increased.  Political and military steps were being taken.  The Roman Catholic millions were being mobilised for an atomic war, led by America, against the Soviet Union.  Pius XII was personally using his immense influence to push for just such a war.  And – not surprisingly at all – he decided to capitalise on that “miracle of the sun” which the faithful believed occurred back in 1917.  He came out and told a blatant lie – that the sun had danced for him as well, just as it had for the three children long before!  And thus did the Roman pope stage “the greatest fake miracle of the century.”[35]

How did he do it?

In 1950, as he was doing everything in his immense power to get the United States to launch an atomic war against the Soviet Union – for the purpose of beginning Russia’s “conversion”, of course – Pius was visited by the Virgin Mary one day in October.  Or so we are told.  We have nothing but the Vatican’s say-so to go by, and frankly, its say-so is worthless.  It was just another one of those many, many Vatican “Just So” stories, as fanciful as anything Kipling ever wrote, which the world’s Roman Catholic population, not to mention everyone else, is just supposed to accept as absolutely true, because a pope said it.  After all, a pope would never lie… would he? 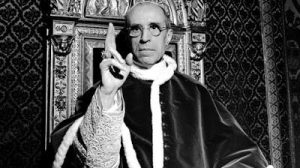 Once he admitted to having been visited by Mary herself, Pius then commanded that the Fatima celebrations in October 1951 were to be the greatest ever held. And it came to pass.  Well over a million people assembled at the Fatima shrine.  And, master strategist that he was, Pius used the occasion to announce, to the assembled mass of humanity, through his personal representative (a cardinal named Tedeschini), that Mary had graciously visited him.  The cardinal faced the immense crowd and, in an emotional voice, announced that “another person had seen this same miracle” of “Mary” appearing to the children in 1917, when the sun did its dance.  “He saw it outside Fatima,” said the cardinal.  “Yes, he saw it years later.  He saw it at Rome.  The pope, the same our pontiff, Pius XII… yet he saw it.”[36]  He went on: “On the afternoon of October 30th, 1950, at 4 p.m., the Holy Father turned his gaze from the Vatican gardens to the sun, and there… was renewed for his eyes the prodigy of the Valley of Fatima.”  And then followed the cardinal’s description of what his dear pope saw: “Pope Pius XII was able to witness the life of the sun under the hand of Mary.  The sun was agitated, all convulsed, transformed into a picture of life… in a spectacle of celestial movements… in transmission of mute but eloquent messages to the Vicar of Christ.”  Furthermore, it occurred not once, but three times: on 30 and 31 October, and 1 November 1950.

The news filled the over one million pilgrims at Fatima with great joy and excitement, as it did when it reached the rest of the Roman Catholic world via the media.  The Jesuits and other Romish theologians gave thanks to “Mary” for the privilege granted to Pius.  Papists the world over believed that Soviet Russia was on the very brink of being “converted” to Rome.  And of course, the only way they could see that was likely to happen was by the U.S. declaring war on the USSR.  Millions of Roman Catholics were actively praying for war.  In the United States, prominent Papists rose to prominent positions within the government, and an American ambassador was sent for the first time to the Vatican in 1951.

The world was edging closer and closer to a nuclear holocaust in those Cold War days – and the Vatican was at the very centre of the intrigues to bring it about.  On 7 July 1952, Pius consecrated the world, and especially the Russian people, to the “Immaculate Heart of Mary” – again.[37]

Indeed, by 1952, “Rome, claiming to be a center of peace, had become a vast, sinister center of war.  The ever more imposing procession of generals, admirals, war ministers, saturation bombing experts, clanking their boots along the Vatican’s marble corridors, was the damning demonstration that these individuals, professional war leaders, were there to see another war leader, Pope Pius XII…. The skillful amalgamation of papal diplomacy, religious administrative might and organized superstition had made of the pope one of the supreme war leaders in the active promotion of a third World War.”[38]

Well, the world did not go to war then.  And although Pius XII continued to whip up Roman Catholic frenzy by means of “Our Lady of Fatima”, intensifying the cult and seeking to prepare Roman Catholics the world over for the inevitable coming war with the USSR, he died in 1958 – and with the election of a new pope, John XXIII, everything changed.  For John was a pro-Communist pope.  And global politics entered a new era – just as dangerous, if not more so, but decidedly different from what went before.

Then on 21 November 1964, at the request of 510 archbishops and bishops from 78 countries meeting for the Second Vatican Council, Pope Paul VI also consecrated the world to the “Immaculate Heart of Mary”.[39]  But nothing happened.  Russia was no more converted to Roman Catholicism in the wake of that 1964 consecration than it had been in the wake of the 1942 and 1952 consecrations.

So then, if neither 1942, nor 1952, nor 1964, was the valid consecration of Russia to the “Immaculate Heart of Mary”, and if Russia was not beaten militarily, either by the Nazis in World War Two or by the Americans in the aftermath of World War Two, it was necessary for the Vatican to claim yet another date for the correct consecration, and yet another time for the “conversion” of Russia.