And there is more: about six months before the children saw the apparition of “Mary”, they saw an “angel”, who spoke with them as well.  This being identified itself in the following manner: “I am [Portugal’s] guardian angel, the Angel of Portugal.”[5]  Why is this significant?  In the book of Daniel, chapter 10, we are given a glimpse of the warfare going on in the unseen spiritual realm.  Verse 13 speaks of “the prince of the kingdom of Persia” who withstood God’s holy angel.  The following is from my book, The Prophecies of Daniel: this “was not King Cyrus of Persia, nor his son the prince; for how could any mortal man withstand the power of an angel for one second, let alone for three weeks?  Angels far exceed men in power!  No, this prince was an angel himself – but a fallen angel!  A devil…. This particular demon was over the kingdom of Persia.  Persia was a heathen kingdom.  Its people were idol-worshippers, and God’s Word tells us that the worship of idols is the worship of devils: Deut. 32:16,17; 1 Cor. 10:20.  Devils receive the worship directed to dumb idols.  From this text, therefore, we learn that the kingdoms of this world, which are all in spiritual darkness, are under the influence of very powerful demonic beings.  Over each heathen kingdom there is a demonic ‘prince’: a powerful demon who controls operations, so to speak.  And under him, in ways we are not told, are many other demons who do his bidding.  These are the rulers of the darkness of this world, the principalities and powers in high places (Eph. 6:12).”[6]

Those three children saw the demonic “prince of Portugal”!  As an “angel of light” he appeared to them, for the purpose of deceiving them.  And deceive them he did, putting Mary on an equality with Jesus in the words he spoke, and appearing to them holding a chalice, above which was the “consecrated bread” of the idolatrous Roman Catholic mass (the “host”, as it is called), from which a few drops of blood flowed into the chalice, and calling the “host” and the contents of the chalice the actual body and blood of the Lord.[7]  This was blasphemous deception indeed, lies from the infernal pit, not from heaven.  This was no angel of God, but the most powerful demonic entity over Portugal!

And what about the supposed “miracle of the sun”?  It was called “a stupendous miracle, such as no one had dared to imagine.”[8]  But was it?  Did the sun really do what it is claimed it did, on the date of the last of the six apparitions of “Mary” to the children?  Did 70 000 people at Fatima, assembled with the three children, really witness the sun becoming pale, turning three times on itself speedily, jumping out of its orbit and zig-zagging towards the immense crowd, then stopping and returning to its normal position?

Historian Avro Manhattan drily commented: “The fact that the other two thousand million human beings in the world never noticed the sun agitate, rotate and jump out of its orbit did not bother the Catholic Church in the least”.[9]  And there is the answer.  Of course the sun did not do this.  It would have been witnessed by people in every country from which the sun was visible at that time, and not just those 70 000.  Not only that, but it would have been a divine miracle, to be compared with nothing but the miracle of the sun standing still at the command of Joshua (which is, in fact, precisely what a Jesuit priest, Pio Scatizzi, compared it with, writing: “In world history, outside ordinary eclipses, nothing prodigious has been recorded of the sun, with the single exception of the Biblical miracle of Joshua – the day’s standstill of sun and moon.  This fact and no other marks Fatima with a stupendous singularity quite apart from the rest of the story”[10]).

It simply did not happen.

“But 70 000 people witnessed it in one place at one time!” we hear people indignantly object.  “Were they all liars?”  It is true that newspapers at the time published photographs of the great crowd, and articles were written about the “miracle”.[11]  But we do not have the recorded eyewitness testimonies of even a fraction of those tens of thousands.  A few eyewitness accounts were recorded, however.  What do they reveal?

One of these was the account of the father of the siblings Jacinta and Francisco, but we must set aside this testimony as it is naturally biased, the word of a loving father who believed in his children.  We must also discount the testimonies of priests of Rome – who naturally had much riding on the acceptance of the “vision”.  Even the testimonies of medical doctors, if they were devout Papists, are not to be trusted.  There is this common belief that because doctors are “men of science” we may trust every word that falls from their mouths, but doctors are mere men, and given to the same biases and religious inclinations as other men.  But there were others.  For example, the two principal newspapers of Lisbon reported on the incident, and claimed that it happened.  However, in one of these accounts there are two revealing statements.  The first is this: “in one place a woman cried out: ‘How terrible!  There are even men who do not uncover before such a stupendous miracle!’” – referring to the fact that many men uncovered their heads at the scene.  And the second is this: “People then began to ask each other what they had seen.  The great majority admitted to having seen the trembling and the dancing of the sun; others affirmed that they saw the face of the Blessed Virgin; others, again, swore that the sun whirled on itself like a giant catherine wheel and that it lowered itself to the earth as if to burn it in its rays.  Some said they saw it change colours successively”.[12]

Analysing this journalist’s account, the following stands out.  First: the most likely reason there were men who did not uncover their heads was that they had not, in fact, seen anything!  The journalist does not even consider this.  Second: although the journalist states that the “great majority” claimed they saw the dancing of the sun, there were said to be 70 000 people there.  Did he interview, or even hear the comments, of the “great majority”?  Impossible.  He would have only heard the comments of a small fraction of that immense crowd.  Third: if this was a real miracle from God, why did they all see such different things?  Why did only some claim to see “Mary”?  After all, she was at the very centre of the entire Fatima business. 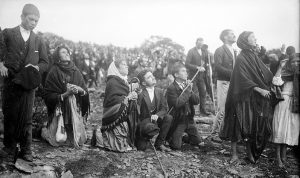 Part of the crowd watching the “miracle of the sun”