What Really Happened at Fatima in 1917?

Did three little shepherd children really experience visions of Mary?  Are the messages to be trusted?  Are they to be heeded?  Before analysing the three “secrets” themselves, these questions must be answered. 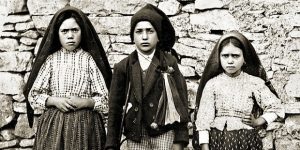 In an article I wrote, published in The Bible Based Ministries Magazine in 2001, I said: “Rome has claimed that a number of supposed visions of Mary have occurred over the years, and the Fatima ‘vision’ is the most famous of all.  True Christians know, of course, that these ‘visions’ are manufactured Papist delusions, or perhaps in certain cases demonic deceptions.  Mary never appeared at Fatima, or anywhere else for that matter.  This was not a message from God, and it was not a message from Mary, either!  The Lord would not, and Mary could not, give such a message!  She was blessed among women (Lk. 1:28), in that she was chosen by God to be the mother of our Lord.  But she was a sinner like everyone else, who saw her need for the Saviour, and was converted to Him (Lk. 1:46,47).  She was not conceived without original sin, nor was she taken bodily into heaven, nor does she hear and answer prayer, nor does she appear to men, as Rome claims!  Any supposed ‘appearance’ of Mary is a lie!”[4]

For the true Christian, then, the answer is straightforward: Mary did not appear to those children in 1917, and therefore no message from heaven was given to them.  And since it was not a message from God, we are not in any sense to trust it, nor to heed it.  Mary is in heaven along with all departed saints, but none of them are ever sent back to earth with messages from God (Lk. 16:19-31).  It is in fact strictly forbidden for the Lord’s people to try to make contact with the dead, or to receive any supposed messages from them (Deut.  18:10-12; Isa. 8:19,20).  Contact with the dead is the sin of necromancy – and Mary is most assuredly dead.

God speaks to us through His written Word, the Bible.  This is all-sufficient.  Visions of any kind are no longer given (protestations from Pentecostals notwithstanding!).

And besides, the “Mary” of Romanism is a powerful goddess, who is worshipped by Romanists the world over.  This heathen idolatry, blasphemously claiming to be true Christianity, is an abomination to God!

So then: what actually happened?  Most of the claimed “appearances of Mary” which occur from time to time in various parts of the world are frauds; manufactured Papist delusions.  In many cases, however, it may be that they have been demonic deceptions.  But there is also the possibility that some are a combination of both.  And this is what appears to have been the case with the Fatima apparitions.  To understand this, the reader will have to pay careful attention to all that follows.

There are solid reasons for believing that the supposed “prophecies” of Fatima were fraudulent, as will become apparent as we proceed.  They were deliberate concoctions of the Jesuits.  Now of course, this is still satanic deception!  Satan inspires men to stage supposed “messages from the Virgin”, for the purpose of delusion.  Rome’s long history is filled with tricks, frauds, and deceptions of all kinds.  2 Thess. 2:9, a prophecy of the Papal Antichrist, speaks of his “lying wonders”: pretended miracles.  The supposed “prophecies of Mary” at Fatima were a huge fraud, designed to deceive the world.  The agents of Rome had very specific purposes in mind.

However, the evidence certainly does indicate – strongly – that the three children really did see “something”, and that this “something” was a demonic manifestation.  The claimed “prophetic” element regarding Russia, war, etc., etc. (which we will examine below), was “manufactured” later by the agents of Rome; but the demonic delusion of the children was real.  Roman Catholicism is a religion of gross idolatry; and the Roman Catholic worship of “Mary” is nothing but the idolatrous worship of a powerful demon, who receives worship behind this name.  It is entirely possible, even most probable, that those three children were demon-possessed; for leaving aside the supposed “prophetic” element regarding Russia, etc., which was added by Rome’s priests later, the children went into trances, described “Mary” in glowing terms as they saw “her”, and promoted the evil false “gospel” of Roman Catholic salvation to the masses who flocked to hear them.  Satan was deceiving the masses through these children.  The devil transforms himself into an angel of light at times (2 Cor. 11:14); which is precisely how the children saw “Mary” (a beautiful lady” more brilliant than the sun”, is how Lucia described her).  Satan is the master-deceiver, and will use any means he possibly can to deceive men.