One who doubted the 2000 explanation was famous Italian journalist and author, Antonio Socci.  In his manuscript entitled The Fourth Secret of Fatima, he maintained that the Vatican had deliberately withheld an important part of the Fatima “revelation” in 2000.  He also stated that the nun Lucia was grilled for hours and hours, over a number of years, by a Vatican cardinal.  Yet this man – Tarcisio Bertone – did not record the conversations; and Socci believed it was because viewers would then be able to see just how intense was the pressure on Lucia, who by then was a very old woman (we are told she died in 2005 at the age of 97).[68]  She would have been a virtual prisoner inside the cloistered convent which she had joined so many years before.

Again it must be borne in mind that Rome always has a “Plan B” – just in case things don’t quite pan out as it hoped.  And various things which have occurred since 2000 have caused people within the Roman “Church” to question the validity of Ratzinger’s interpretation of the “third secret”.

In the words of one of those who was not convinced of Ratzinger’s interpretation, German Roman Catholic historian and author, Michael Hesemann, considered an expert on Fatima, “But already a year later [a year after Ratzinger’s revealing of the “third secret” in 2000] 9/11 happened and we are not so sure anymore that this vision indeed refers only to the past.  The persecution of Christians is more violent than ever, and the ‘Islamic State’ openly declared war against the ‘People of the Cross’ and ‘Rome.’  Russia was converted, but not all mankind, unfortunately, and great parts of the West lost their faith, practice abortion and follow antichristian doctrines like ‘gender.’  Therefore, we can indeed expect new chastisements.  As Pope Benedict XVI stated on his pilgrimage to Fatima in 2010: ‘We would be mistaken to think that Fatima’s prophetic mission is complete.’”[69]

Note from the above statement how the message of Fatima, and its supposed fulfilment, is sufficiently ambiguous that at any time, the Jesuit/Vatican leadership can “re-interpret” aspects of it to fit new circumstances.  We saw this with the “second secret”, and now we see it with the third one.  Was Russia properly consecrated as per “Mary’s” wish?  Maybe; maybe not.  Has Russia been “converted”?  Maybe; maybe not.  Was the “third secret” fulfilled by the persecution of Roman Catholics by Communists in the twentieth century, or is it being fulfilled by Islamic terrorists in the twenty-first?  It may be the one, but then again it may be the other.  As John Paul II was not actually killed when an assassination attempt was made on him, was that aspect of the “vision” fulfilled or not?  Well, possibly, but then again possibly not.  Everything is deliberately sufficiently vague, so as to fit new times and new scenarios as they arise.  Very clever indeed, and very useful to keep the faithful guessing, but hardly a message from heaven!

The Muslim Aspect of Fatima

We have already looked at the attempted assassination of John Paul II in 1981; and I said that the “Muslim connection” would be examined later on in this article.

The apparitions occurred near Fatima, in Portugal.  Think of the name: Fatima!  What is not widely known in the West is that Fatima was the name of Mohammed’s daughter!  She is highly revered within Islam.  Was this just another coincidence?

We have already asked: was it mere coincidence that the Vatican claimed the three children had their “visions” pertaining to Russia’s “conversion” in the very months preceding the Bolshevik Communist Revolution of 1917?  And the conclusion is obvious: no, it was not mere coincidence.  It was deliberate.

Now we must ask: was it also mere coincidence that the place where the children supposedly experienced these “visions” was a place called Fatima?  Just as Russian Orthodoxy is Rome’s age-old adversary, so too is Islam.  Rome has desired the conquest of both for centuries.  Is it possible that Fatima was deliberately chosen, the plan being to make use of this symbolism at some time in the future, with regards to Islam?

There is no way, at this present time, of saying for certain.  Perhaps it really was nothing but coincidence.  But if so, it still remains true that the Vatican has gained much mileage from the fact that the “visions” of “Mary” occurred at Fatima.  Both Mary and Fatima are highly revered within Islam.  Mary is mentioned many times in the Koran, with one chapter in that book being named after her; and Muslims even call her “Our Lady” (just as Romanists do).  Fatima was the daughter of Mohammed himself, and Muslims believe he stated that Fatima has the highest place in heaven after Mary!  There can be no doubt that, at the very least, these things softened Islam’s approach to Roman Catholicism as the twentieth century progressed, and interfaith moves began to occur between these two giant false religions.  Today, an increasing number of Muslims actually make pilgrimages to Marian shrines – particularly Fatima![70]

Certainly, there have been, and are, prominent Roman Catholics who believe that it was all part of the plan – although of course they attribute it to Mary herself.  For example, the popular and well-known Roman Catholic archbishop and TV personality, Fulton Sheen, believed that Mary chose to be known as “Our Lady of Fatima” as a pledge and sign of hope to Muslims, and as an assurance that they, who respect her so much, will one day accept Christ as well.[71]

And then is Mehmet Ali Agca, the would-be assassin.  And we have to ask, also: was it mere coincidence that the man chosen to try to kill John Paul II was a Muslim, on the payroll of the Soviets (thus there was the link between Rome’s two great enemies under the pontificate of John Paul II – the Soviet Union and Islam), and that he made the attempt on the anniversary of Fatima?  What was the impact, perhaps on millions of Muslims worldwide, when one of their own tried to kill the pope on the anniversary of “visions” given at a place called Fatima, the name of their prophet’s revered daughter?  And then, how much greater still was the impact on them, when that same pope attributed his survival to Mary – another woman greatly revered in Islam – and even forgave Mehmet Ali Agca, visiting him in his prison cell and holding a long conversation with him in private? 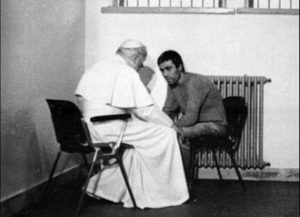 Again, with all the unknowns, the imponderables, the uncertainties, this much is certain: Fatima has massively assisted Rome’s global advances, including its inroads into Russia and the Islamic world.

With the 100th anniversary of the Marian apparitions occurring in 2017, Fatima once again became global news.  In addition, the timing was opportune: Russia on the one side, and the United States and western Europe on the other, are facing off today, all over again.  The atmosphere is tense.  A papal visit to Fatima now, emphasising Fatima’s message of “the conversion of Russia”, sends a clear message, just as it has at other important moments in history: the Vatican will be supportive of any and all steps to bring about the collapse of the Russian political-military government.

Remember Pius XII and how, in alliance with the USA, he used Fatima as a political tool against Russia?  Today the Vatican is targeting Russia all over again.  And Fatima is a very helpful tool in this deadly and global political game.  The 100th anniversary occurred at a most convenient and opportune time, as far as the Papacy was concerned.