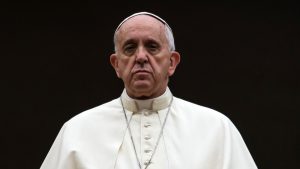 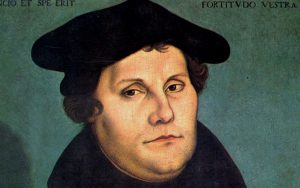 The year 2017 marks the 500th anniversary of that momentous event, and – not surprisingly – all kinds of celebrations have been planned to commemorate it, by various “Protestant” institutions.  But the one religious institution which should want nothing whatsoever to do with such commemorations and celebrations, should be the Roman Catholic institution.  After all, the Reformation struck the greatest blow to Papal power that it had ever experienced.  As a result of the Reformation, the Papacy’s vice-like grip on almost all of Europe was broken in a number of countries.  For the first time since the Papacy had assumed control of Europe centuries before, it experienced immense losses, politically and religiously.

No, the Roman Papacy should have no grounds for celebration in 2017.

Who could ever have imagined that such a day would ever arrive?  But it has.  Even Romanists are open-mouthed with astonishment at how times have changed.  Let this fact sink in: the Papacy is commemorating the Reformation!

What in the world is going on?

It would be more appropriate to ask: what, in the dark regions of hell, is going on?  For that is where these astounding events were first planned, and what we are witnessing is simply the outworking, in history, of satanic activity in Satan’s underground.

Please note that I often put the term “Protestant” in inverted commas, to indicate that these are not true, biblical Protestants at all.  Most of what passes for “Protestantism” today is an absolute disgrace.  In such cases it is nothing but an empty word.  Likewise, I do the same with the word, “church”, when a false “church” is meant.

Kicking Off the Festivities: Lutheran/Papist Collaboration in Sweden – Led by the Jesuit Pope 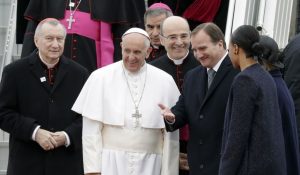 Francis I arrives in Sweden

Reformation celebrations got off to an early start in Sweden.  Instead of waiting for the year 2017 to roll around, late October 2016 saw the Jesuit pope, Francis I, travelling to Sweden to join Swedish Lutherans in their festivities – at their invitation!

Just stop right there for a moment.  Think about this.  Roman Catholics celebrating with Lutherans?  The members of the very religious institution founded by Martin Luther himself?  The man Rome denounced as an arch-heretic and a devil?  The man excommunicated and damned to hell by the pope at the time?  The man who called the pope Antichrist?

Yes, indeed.  That Luther.  That Lutheran institution.  In 2016 Francis I, the pope of Rome, the current occupant of the throne of Antichrist, travelled to Sweden, at the invitation of Swedish Lutherans, to commemorate Martin Luther and the Reformation.  And there they all were, high-ranking Lutherans and the Roman pontiff and his cronies, smiling at one another, embracing one another, and calling one another “brother”.

Romish cardinal, Kurt Koch, president of the “Pontifical Council for the Unity of Christians”, said, “This is not just the commemoration of the 500th anniversary of the Reformation, but also the celebration of fifty years of dialogue between Lutherans and Catholics.”  And Greg Burke, director of the Vatican Press Office, said that the papal visit to Sweden for this joint ecumenical commemoration was a big step forward because Roman Catholics and Lutherans were “no longer defining themselves in opposition to each other,” but in communion with each other.  In essence he was saying: the Lutheran Reformation is now dead.  It is over.

His sentiments were echoed by Martin Junge, secretary general of the Lutheran World Federation, who said: “We are working on the last details of what we truly believe is a historic commemoration…. We do this a year ahead of the 500th anniversary, thereby hoping to give a very strong ecumenical signal, that we understand because of our dialogues, because of the trust that has grown among us, because also we have been able to remove some of the obstacles of doctrinal differences among us, that the time is mature, is ripe, to move ‘from conflict to communion’ [the name of the joint Roman Catholic/Lutheran document].”

Yes.  The Lutheran Reformation, the Lutheran break with Rome, is now over.  The rift is all but healed.  It took 500 years, but Rome has conquered, and what Martin Luther began has been, essentially, obliterated.  Yes, Lutheranism still exists, but the protest with Rome is over.  The differences with Rome have been overcome.  That which for so long divided Lutherans from Papists has been resolved.  The Lutheran Reformation can now be relegated to the dustbin of history.

Junge also said: “I believe, only a few years ago, if you would have said that there would have been a joint commemoration of the Reformation on the day Lutherans and Protestants all together commemorate and remember the Reformation, and that that would be done together, Catholics and Lutherans, many would have said ‘impossible,’ so I take courage, personally, of the many impossible things that have become possible, because of dialogue and the many different ways in which we have been engaged.”  He was right in saying that only a few short years ago such a thing would have been dismissed as impossible.

As one Romish writer put it: “This trip is further proof that the perception the Lutherans have of the pope has changed.  Nobody could have imagined years ago that they would unite to celebrate the anniversary [of the Reformation] together.” Note well: Lutheran perceptions of the pope have changed – not Papist perceptions of Lutheranism!  It is always the “Protestants” who change, the “Protestants” who move towards Rome, the “Protestants” who surrender this, that or the next thing.  Rome never changes, never gives up anything.  She firmly maintains the errors, heresies and blasphemies she has always maintained, and even adds to them.  She has no intention of changing anything.  If the two sides come together, it must always be by the “Protestant” side moving Romeward.  This is not both sides “finding common ground”, as ecumenists fondly imagine.  It is always the “Protestants” moving Romeward.

Next, consider the comments of Jens-Martin Kruse, another Lutheran leader.  This man has played a very prominent part in ecumenical dialogue, with popes John Paul II, Benedict XVI and Francis I all having visited his “church” in Rome.   “I think the world needs a gesture of Christian unity,” he said.  “A gesture.  A gesture that says Christians are committed to peace.  There are no more wars between us.  The world needs a gesture that says that peace is possible.”

This Lutheran feels the need to show that “Christians are committed to peace”, because he thinks that Roman Catholics and Lutherans are true Christians, and yet he well knows that both institutions have committed atrocities in the past.   The Lutheran institution murdered those (such as the Anabaptists) with whom it did not agree (there is plenty of evidence, too often ignored by many Protestants who would prefer to view Lutheranism as a true Christian church), just as its Papal mother had murdered Lutherans and others.  But we have news for this deceived man: true Christians do not need to make any empty gestures about their commitment to peace, for all true Christians seek always to live peaceful lives, harming none, following Christ the Prince of peace.  It is only false religious systems, such as the Papist and the Lutheran, which have to try to convince an understandably sceptical world that they are peaceful, when their histories are so filled with violence.

This man also said: “We need strong popes and bishops with courage, because we must continue toward the path to unity.  There is not enough theological dialogue.  We must bear witness together.”

Now why would a Lutheran pastor be longing for “strong popes”?  And where in the Bible does it say that everyone must continue on the path to this false “unity”?  Certainly neither the Lord Jesus Christ, nor His apostles, ever taught such a thing!  As for “bearing witness together”, light cannot bear witness with darkness, nor does light bear witness to darkness.  It is impossible.  Therefore, if Lutherans are able to bear witness together with Papists, there is only one conclusion we can draw: they are both in spiritual darkness – for there is no Gospel light in Rome, and therefore any other institution in fellowship with Rome has no Gospel light in it either.

Why were the 2016 celebrations held in Sweden?  The reason was that this country is the headquarters of the Lutheran World Federation, which invited Francis, and which has been so committed to ecumenical relations with the Papacy for many decades.

And so it came to pass that Francis jetted into Sweden “on an ecumenical journey to commemorate the start of the Reformation by focusing on the 50 years of dialogue that have highlighted the points of unity between Catholics and Lutherans.”  There always were many points of unity between the two, but today there are even more – thanks to half a century of devilish ecumenical deception.