The Path to Papist “Sainthood”

The “Church” of Rome undertakes an examination of any candidate for “sainthood”.  And once Rome decides that a dead person is in fact a “saint”, canonisation follows.  What is “canonisation”?  It is a public, formal act of the pope of Rome, and by this act the “Church” of Rome attests to the “sanctity” of the dead person.  At the ceremony, the pope solemnly declares the candidate’s name to be included in Rome’s list of “saints”.

To become a “saint” in the false Papist sense, it is necessary for two “miracles” to be attributed to the person’s intercession with God after their death.  For Rome claims they are supposedly able to hear and answer the prayers of Papists on earth!

Immediately after her death the Roman Catholic institution began the process of “beatification”.  This is the first step on the road to Papist “sainthood”.  She was “beatified” by John Paul II in 2002, following the Vatican’s recognition of a supposed miracle of healing through her “intercession”.  The recipient of this “miracle” was an Indian woman who, we are told, suffered from a tumor in her abdomen.  Of course, in such cases it is a simple matter for Rome to produce doctors willing to say that a “miracle” had occurred, even though there are a number of other explanations.

A second “miracle” was needed for Teresa to be declared a “saint”, and this was the supposed miraculous healing of a Brazilian man in 2008, who had multiple brain abscesses, and who, it is claimed, was cured within a day of being in a coma.

1500 Impoverished People at the Canonisation Ceremony

The canonisation ceremony in Saint Peter’s Square in Vatican City was attended by some 100 000 people.  Always with an eye to good publicity, the organisers placed some of Teresa’s Missionaries of Charity nuns in the front rows, accompanied by around 1500 impoverished men and women.[8]  But pause for a moment and think about this: why were they still impoverished?  The palace of the Roman pope brought these people there, and gave them front-row seats.  They were hosted in the Vatican, the headquarters of the wealthiest religious system on the face of the earth!  With well over a billion members, it would have been a drop in the ocean for the Vatican to have instantly changed their state from one of poverty to sufficiency!  One glittering ring off a cardinal’s fat finger could do wonders for impoverished people.  The money saved by cutting back on just one wine-drenched, sumptuous meal for some bloated “prince of the Church” would do more for the impoverished than giving them front-row seats at the devilish delusion of turning Teresa into a “saint”.

After the ceremony, Francis invited these 1500 homeless people for pizza.[9]  Pizza!  One meal, provided by the richest organisation the world has ever seen.  Oh how generous!

And Now the Dead Teresa Will Supposedly Assist the Living!

This is antichristian necromancy at its worst.[10]  Francis said at Teresa’s canonisation: “May this tireless worker of mercy help us to increasingly understand that our only criterion for action is gratuitous love”.[11]  How exactly will she “help” people to do this?  She is dead!  The dead do not help the living!  Ah, but Rome teaches that they do – for now that Francis has so magnanimously “enrolled her among the saints”,  Roman Catholics may pray to her, ask for her intercession with God, beg for help from her, etc.  In the Bible this is called necromancy: attempting to contact the dead (Deut. 18:11; 1 Sam. 28).  It is sinful.  And it is impossible.  It is paganism.  But Roman Catholics are permitted to do it, contrary to the very Word of the Lord! 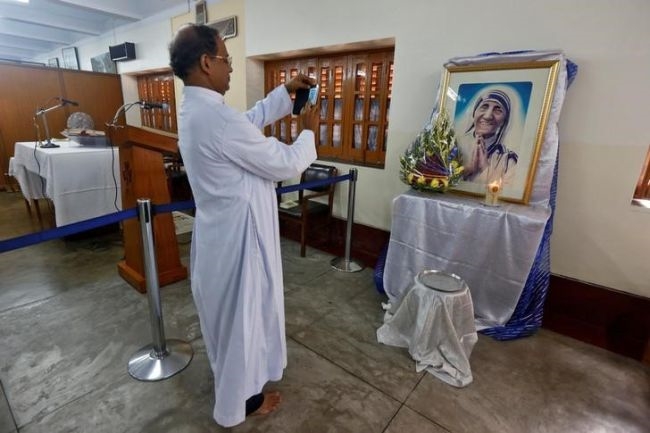 Her biographer, priest Lush Gjergji, said something very revealing: “Mother Teresa is a rare and unique phenomenon in the history of humanity.  She is not only a saint for Christians [i.e. Roman Catholics] but, in a certain sense, also for atheists, unbelievers, Hindus and Muslims.”[12]  This sums her up.  She was an interfaith ambassador for Rome in this age of interfaith and syncretistic policy.  She did wonders for the image of Roman Catholicism in the world.  Not being a true Christian, she had no true Gospel to share.  Instead, she prayed her Romish prayers for the people who came under her care, and even encouraged them to die in their own false religions.

When she was “canonised” in the Vatican, it was not only Roman Catholics who attended the ceremony: many people of other religions came as well.  A group of Indian Sikhs attended, and one of them said, “We actually came here to see Mother Teresa’s special occasion here and we are all associated to Mother Teresa.  Not just myself, all the people, billions of people who are in India.  Everybody knows Mother Teresa.  She’s done so much work in Calcutta and the work has been carried over in many, many nations – everybody knows her.”[13]

Yes, everybody knows her, and people of all religions love her, because of her works for the poor, etc.  But they have no love for the Lord and Saviour.  Although she claimed to be a “Christian”, she was anything but a true disciple of Christ.   And the multitudes belonging to other religions were in no sense drawn to Christ by either her words or her deeds!  The Sikh group admitted it openly, saying that honouring her had nothing to do with her Roman Catholic religion, but rather her push for peace in the world by reaching out to every person in the streets.  One of them said, “My religion is Sikh and we want to work with all religions, each other, and we want peace in the world.  That’s my hope.”  This is Teresa’s real legacy: all religions seeking common ground and working for peace in the world.  But this was not the mission of the Lord Jesus Christ, nor that of His disciples; and it is not the mission of any true Christian in the world today.

The current Superior General of the Missionaries of Charity, nun Mary Prema Pierick, said in early September, prior to Teresa’s canonisation, that people of various religions are drawn to her example.  “India has a love and great respect for Mother.  Everyone saw the sanctity, even in their own religious concept.”[14]  In saying this she showed that it was not Teresa’s intention to turn people from their own religions.  And as for India loving and respecting her, this is doubtless true – yet this same India persecutes the true followers of Christ, even today!  India’s Hindu government passes anti-Christian legislation, yet “loves and respects” this Roman Catholic nun.  Proof positive that the religion of Teresa was not biblical Christianity.

As she worked so much in India, it is not surprising that those of the Hindu religion loved her.  But those of other religions did so as well.  In her home country, the government of Kosovo prepared a concert of classical music in her honour on the eve of her canonisation.  The concert was held in a Roman Catholic basilica, and was called “Hymn to Mother Teresa”; and almost all the players in the orchestra were Muslims, “who offered themselves gladly to play in her honor, in keeping with her spirit of peace and her universal message.”[15]

Nun Pierick stated, “Mother Teresa has been an icon of unity, tolerance, acceptance, and of loving each person.”[16]  She claimed (falsely) to follow Jesus – yet this was not His mission on the earth!  This is what He said of unity: “Neither pray I for these alone, but for them also which shall believe on me through their word; that they all may be one; as thou, Father, art in me, and I in thee, that they also may be one in us: that the world may believe that thou hast sent me” (Jn. 17:20,21).  The unity Christ prayed for (and His prayer has been answered through the centuries) is the unity between true believers, and no one else!  The unity of those who believe in Him!  Nowhere did He ever pray for spiritual “unity” between Christians and Hindus, Christians and Muslims, Christians and Buddhists.  This is the world’s idea of unity, and it is a lie.  The world hated Christ when He was on earth, and it hates Him now; but it loves Teresa, an “icon for unity” in the world’s sense of the word.

She was also an “icon of tolerance”, her successor said.  Again, she may have been – but the Lord Jesus Christ was not.  He said things like: “Think not that I am come to send peace on earth: I came not to send peace, but a sword.  For I am come to set a man at variance against his father, and the daughter against her mother, and the daughter in law against her mother in law.  And a man’s foes shall be they of his own household” (Matt. 10:34-36).  And: “I am the way, the truth, and the life: no man cometh unto the Father, but by me” (Jn. 14:6).  To the world, the most “intolerant” statement of all.  He had no time for the world’s devilish religions.