She “so captivated the world that she was showered with honorary degrees and other awards, almost universally praised by the media and sought out by popes, presidents, philanthropists and other figures of wealth and influence.”[1]  This one sentence alone (from a Roman Catholic newspaper) speaks volumes.  For what did the Lord Jesus warn us about?  “Woe unto you, when all men shall speak well of you! for so did their fathers to the false prophets” (Lk. 6:26).  All the world speaks well of “Mother” Teresa – that alone is enough of a warning that this woman did not truly know the Lord.  She “captivated the world” – but Christ was hated by the world, and He said to His true disciples, “And ye shall be hated of all men for my name’s sake” (Matt. 10:22).  She “was showered with honorary degrees and other awards” – but the Lord’s true servants, instead of being honoured, are despised (1 Cor. 4:10), and are “made as the filth of the world, and are the offscouring of all things” (1 Cor. 4:13).  She was “almost universally praised by the media” – but Jesus said to His true saints, “If ye were of the world, the world would love his own: but because ye are not of the world, but I have chosen you out of the world, therefore the world hateth you” (Jn. 15:19).  She was “sought out by” the powerful, the wealthy and the influential of the earth – but the Bible declares that very few from these classes of men are ever numbered among the followers of the Lord Jesus (1 Cor. 1:26-29); most hate the Lord and His people, and persecute them (Psa. 2:2,3).

A priest and member of her Missionaries of Charity had this to say of her: “Because she was one of the most admired women of the 20th century – not just in the Church – not since St. Francis of Assisi has someone had that echo outside the Church.”[2]  “One of the most admired women of the 20th century”: when Teresa died in 1997, this is what I wrote in The Bible Based Ministries Magazine: “The famous Papist nun, the so-called ‘Mother’ Teresa, died recently, and her death, like so many events in her life, made world headlines.  It is safe to say that she will go down in history as one of the three greatest supposed ‘Christians’ of the twentieth century, along with the Roman pope, John Paul II, and Billy Graham.  And yet John Paul II is the very Antichrist himself, as each pope is, the ‘man of sin’ and ‘son of perdition’ (2 Thess. 2:3); Billy Graham is a pope-praising, ecumenical enthusiast whose doctrine and conduct reveals him to be a servant of the Papal Antichrist, not of Christ;[3] and Teresa, far from being a Christian as the world thinks, was an idol-worshipping heathen, a faithful servant of the satanic Babylonian religion dressed up in ‘Christian’ terminology, a complete stranger to the grace of God in the Gospel.”[4]

A Roman Catholic journalist stated: “19 years after [her] death, her name remains short-hand for a model of self-sacrifice…. One might say, ‘She’s such a Mother Teresa’, when applauding a friend or relative…. [she] has no less global awareness than Coca Cola or McDonald’s.”[5]  It is true: people the world over will say things like, “That person is a Mother Teresa”; she has become the standard by which the world measures what it considers holiness or self-sacrifice or love.  And this is a tragedy!  The world does not point to Christ and speak this way.  It does not even point to some of the Lord’s faithful servants through the ages, true Christians who lived holy and self-sacrificing lives unto the glory of God.  No, the world points to a Roman Catholic nun.  Let no true Christian be found guilty of doing this!  This poor benighted woman was no true example of Christ-likeness.  She was a stranger to Him.

The Jesuits pop up in all kinds of places.  And they lurked in the shadows behind Teresa.  When she was still a teenager, she was inspired to work in India by reports sent home by Yugoslavian Jesuit missionaries in Bengal.  This early exposure to what she would have considered great work by the Jesuits would have created a love for the Jesuits which clearly continued all her life, for when she lay very ill and on oxygen just months before her death, her “spiritual advisor” was a Jesuit priest.[6]

The Jesuit Order has been very active in India, and is adept at taking elements from Hinduism and “catholicising” them.  Doubtless the sons of Loyola would have kept their guiding hands on the shoulders of this faithful Roman Catholic nun throughout her life, whispering into her ear what she should say, what she should do and how she should do it.

The Arrogance of the Pope at the Canonisation

With the following arrogant, hideously blasphemous words, Francis I declared Teresa to be a “saint”:

“We declare and define Blessed Teresa of Calcutta to be a saint and we enroll her among the saints.”[7]  We enroll her among the saints?  It is God alone who makes a person a saint – and he does it while they are on earth, not after they die!  It is too late then.  One has to be a saint in this life, in order to go to heaven: Paul the apostle, writing to the true Christian church in Rome in the first century,  addressed himself “to all that be in Rome, beloved of God, called to be saints” (Rom. 1:7); and likewise he addressed the Christians in Corinth when he wrote, “Unto the church of God which is at Corinth, to them that are sanctified in Christ Jesus, called to be saints” (1 Cor. 1:2).  Biblically, every living Christian is a saint of God, now, in this life!  It is the Lord who calls His elect to be His saints – which makes it supremely arrogant and blasphemous of the Roman pope to haughtily “declare and define” that Teresa is a saint, and to “enroll her among the saints”!  He does not have this power, for it is a divine power.  Who does this man think he is, to stand there uttering such statements?  Well, we know of course who he thinks he is.  But we know what God’s Word really calls him. 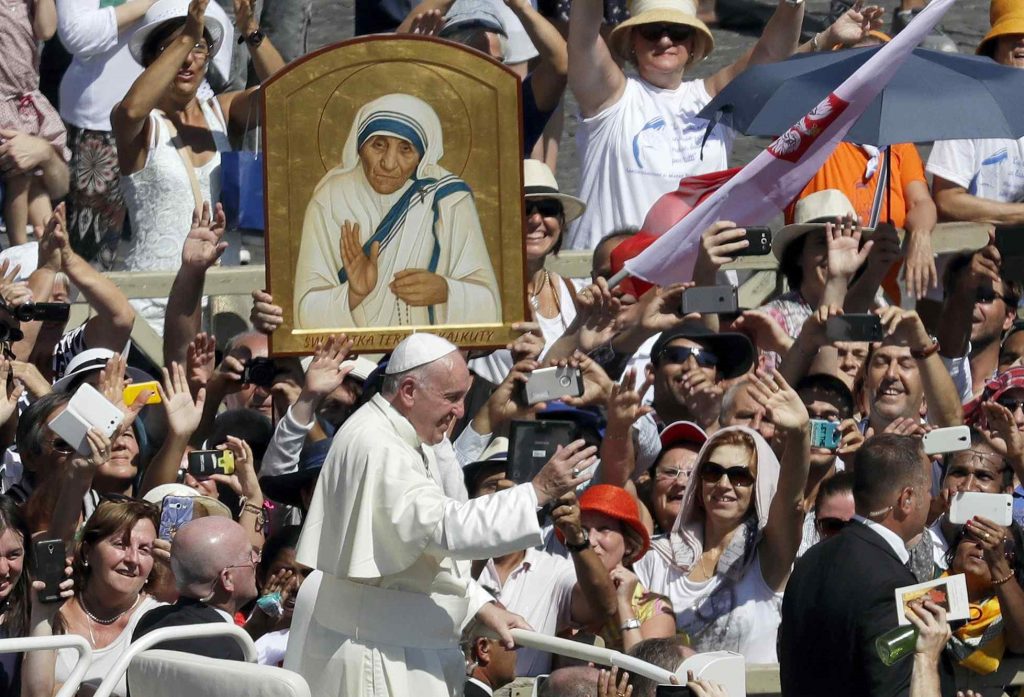