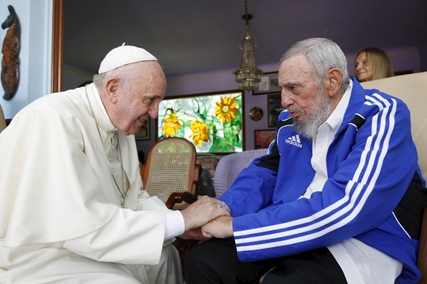 In September 2015, on his way to the United States for his momentous first visit, the pope of Rome, the Jesuit Francis I, visited the Communist island nation of Cuba.  He was officially welcomed by President Raul Castro, who was put in power after his infamous brother, Fidel, became too ill to continue as president.  In his opening speech, Francis mentioned the fact that his two predecessors, John Paul II and Benedict XVI, had both visited Cuba.  For the third pope in a row to now do so, reveals that something momentous was afoot; indeed, that it had been afoot for many years.

What Was Going On?

Months before his visit, acting as mediator between the two sides, Francis had played a big part in the improved relations between Cuba and the United States, after decades of hostility.  He had written to both presidents, urging them to begin a new phase in relations between their two countries; and in October 2014 delegations from both countries met in the Vatican, where they held talks on various issues.[1]  After these papal efforts, presidents Barack Obama and Raul Castro held a personal meeting, and this was followed by both countries opening embassies.  The two also agreed to forge closer ties in trade, tourism and telecommunications.

And then Francis went to Cuba on an official papal visit.  But what was really going on?  The visit did not take place merely because Francis had played such an important part in improving Cuba-U.S. relations.  There was much more to it than that.  When it comes to the Papacy, there always is.

While in Cuba, Francis visited the 89-year-old Fidel Castro, the ruthless dictator of Cuba for so many years.  Castro’s wife, children and grandchildren were also present.  The Vatican claimed that the meeting was not on the official papal itinerary,[2] but of course this was a lie: a visit like this is planned down to the minutest detail, and there was nothing “spontaneous” about it.

So what was this all about?  A small Communist country, yet the third papal visit; an ailing, elderly Communist dictator, who in 1961 had actually expelled the Jesuit Order from Cuba, and yet here he was in 2015, having a cosy chat with the Jesuit pope.  Is there more to Fidel than meets the eye?  What was going on here?

Fidel Castro had been educated by the Jesuits in Cuba.[3]  He embraced Communism, and fought a brutal revolution against the Cuban dictator Batista, which was eventually won by Castro and his Communists in 1959,[4] tragically with great help from the U.S. State Department.[5]  The Cuban Communist government declared itself to be officially atheistic.  Castro allied himself with the Soviet Union, declared Cuba to be a Socialist state – and proceeded to run the country into the ground.  But like Communist leaders everywhere, not for him the privations being endured by his people.  He was an absolute dictator, doing as he pleased, having a secret bank account, and spending at least $25000 a month, mostly on gifts for women.[6]  He lived, in other words, as a Capitalist, just as almost all Communist leaders do, running the island nation as his personal playground.   His own people hated him.  As one author put it, tongue in cheek: “According to Russian press reports, he is so loved by his own people that some 9000 security agents are employed to guard him, lest his many devotees tear him limb from limb.”[7]

Castro willingly trained Communist terrorists from all over the world, including from South Africa.  “Many young South Africans lie dead today because of Castro: as do many young Cubans.  More than 400 000 Cuban soldiers were rotated through Angola in the desperate East/West struggle for that vast former Portuguese territory during the time of Soviet imperialism in Africa.  Seeking to throw back UNITA and the SA [South African] forces, more than 10 000 of Castro’s men were killed, wounded or went missing.”[8]

He was also involved in exporting guns, narcotics, and money laundering.[9]