And In Other News…

The Slaying of Cecil:
A Reflection on What the West Has Become 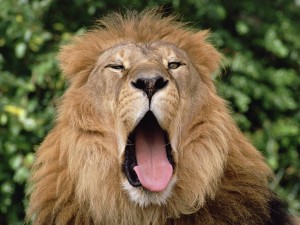 As the western world goes into fits of apoplexy over the killing of Cecil the lion in Zimbabwe by an American hunter, it speaks volumes about the twisted sense of moral outrage so prevalent in the west today.  It is very important that Christians do not fall into the trap of viewing such things through the same distorted lens that western worldlings are using.

American hunters (and hunters from other western countries too) come to Africa all the time and pay big bucks to hunt.  But unfortunately for hunter Walter Palmer, he killed a lion with a name.  Cecil was off-limits to hunters because he had been fitted with a collar for research purposes.  As anyone who has ever kept chickens knows, if his children give any of those birds a name it becomes almost impossible to turn it into dinner for the family, even though they readily eat other chickens all the time.  Likewise with this lion.  He had a name, and therefore – even though lions are hunted every year – he became the focal point for animal-rightists’ anger the world over.  “Poor Cecil!” just tugs at the heart-strings so much more than “that poor animal”.

Palmer claimed that he did not know his hosts did not have the permits to shoot Cecil.  Just how illegal the entire incident was, is for a court to decide, and he is supposed to be considered innocent till proven guilty; but the vicious assault on his character has meant that, as far as the “Bambi crowd” are concerned, he is already guilty of the most terrible crime.

Let me anticipate any hysterical rants from radical “Greens” by saying that I have a deep love and appreciation for African wildlife and have spent much of my leisure time, throughout my life, exploring wild places in southern Africa, observing the wildlife, etc.; and I would view it as an immense tragedy if Africa’s lion population, or for that matter the population of any species, was to disappear from the earth through man’s greed and stupidity.

Lions are not classified as endangered yet, but rather as “vulnerable”.[1]  In this day and age, hunting an endangered species (such as the rhino) is simply unjustifiable, as each time a member of that species is killed it diminishes the gene pool, and the chances of the survival of that species are, to that extent, lessened.  As I wrote in my pamphlet, The Green Goddess: Radical Environmentalism and “Mother Earth” Idolatry, “It is indeed a very sad thing when, for example, poachers drive a particular animal to the brink of extinction, and we should  be concerned about it, and we should do what we can to prevent it (if there is anything we can do).  The fact that God told Noah to preserve two of every unclean beast, and seven of every clean beast, alive on the ark, so as to repopulate the earth after the flood, shows that the Lord does expect man to take care of the natural world around him.”  And: “These beautiful and fascinating creatures should be preserved, to fill us all with wonder and to testify to the Creator’s power.  Thus… it must not be assumed we are against conservation.  We are very much in favour of it.  Man must take care of the world, certainly.  But taking care of it is one thing; worshipping and serving the creature more than the Creator is a very different thing altogether! (Rom. 1:25).”[2]