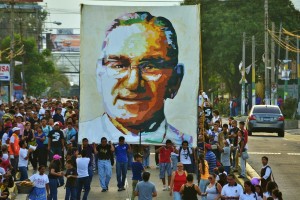 In 2014 it became clear to Romero researchers that a Vatican announcement regarding his beatification was imminent.  The newspaper of the Italian bishops’ conference announced that a panel of theologians advising the Vatican’s Congregation for Saints’ Causes unanimously voted to recognise the archbishop as a martyr, declaring that he had been murdered “in hatred for the [Roman Catholic] faith”.[11]  Clearly, a major shift had occurred within the Vatican hierarchy under Francis, the South American/Jesuit/liberation-theology-supporting pope. 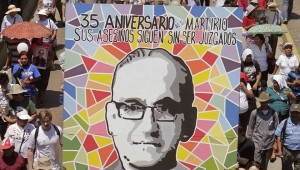 Supporters of Romero among fanatical Jesuits, other militant priests and Papists in South America were jubilant.  One of them, Julian Filochowski, chairman of the Archbishop Romero Trust in London, said, “It’s so long overdue.  I think it will give great encouragement to the Church [of Rome] and to those who are bread-breaking-justice-seeking Christians [Papists] around the world.”[12]  In other words, to the radical Marxist activists swarming through the ranks of the Roman Catholic institution today after decades of Socialist/Marxist propaganda.

Thomas Kelly, professor of systematic theology at Creighton University, said Romero’s beatification and eventual canonisation “would definitely give people who take the social justice teaching of Vatican II very seriously a model and exemplar who is now a saint in a way that we do not have and have not had before.”[13]  Whenever one reads the words “social justice” from a Roman Catholic, it means only one thing: radical Socialist policies.  Vatican II, in the early 1960s, promoted this Socialism throughout the entire Roman Catholic institution, and it has been gaining momentum ever since, for Rome realised that Socialism and Marxism were taking over the world and it wanted to be on the winning side.

And then Kelly said something that really sums it all up: the canonisation of Oscar Romero “would definitely, I think, propel the agenda of Pope Francis in many ways.”  And that, dear reader, is what this is all about.  Francis’ agenda is nothing less than the radical allignment of the Papal institution, the most powerful religio-political force on earth, with the international Socialist and Marxist cause.  And the Romero affair is just another important step in that direction.  As Kelly went on to say, there are important similarities between Francis I and Oscar Romero: these “include a deep concern for the poor, efforts to minimise the power of the very wealthy and use of the pulpit to advocate for the poor and victims of societal abuses”.  How nice and pleasant all this sounds, and yet how far from the true Gospel!  It is Communism, dressed up in nice-sounding phrases about the “poor”.

The next step was for the cardinals and bishops of the Congregation for Saints’ Causes to vote on whether to advise Francis to issue a decree of beatification.  As expected, they voted unanimously to recommend that Francis recognise Romero as a martyr; and it was announced in February 2014 that Francis had indeed done so.  Things were moving very rapidly.  And no wonder: around the world the Papal institution has to constantly strive against a secularised, often hostile, anti-religious culture, media, etc., and this is not the time for it to be a stickler for archaic details of ritual and procedure.  It needs modern “saints” and it needs them now – and if it has to speed things up a little more than in the past, well then, so be it.  The unwritten Jesuit motto has always been, “The end justifies the means.”  And Francis, let it never be forgotten, is a Jesuit.

Francis recognised that the archbishop had been slain “in hatred of the [Roman Catholic] faith” and not for purely political reasons (a blatant lie).  Their “proof” of this?  “He was killed at the altar,” said Vincenzo Paglia, an archbishop and chief postulator of Romero’s “sainthood” cause.  “Through him, they wanted to strike the Church that flowed from the Second Vatican Council.”  The shooting “was not caused by motives that were simply political, but by hatred for a faith that, imbued with charity, would not be silent in the face of the injustices that relentlessly and cruelly slaughtered the poor and their defenders.”[14]    Oh, it is entirely possible his killers hated the radicalised, Communistic “Church” that had flowed from Vatican II’s teachings, for millions of Roman Catholics at that time certainly did hate it; but they were striking at a political rebel and fermenter of violence against the State.  This does not in any sense condone their cowardly and gruesome murder, but those who worked so hard to get his “martyrdom” recognised had to give a far more “spiritual” context to his death than it had in reality.

As for the Romish faith being “imbued with charity” and being on the side of “the poor”, this is all nonsense.  It is a most uncharitable, hate-filled religion and always has been, mercilessly cruel, having massacred multiplied millions; and it only now “supports the poor” because it can advance itself in the world of today.  If things changed tomorrow, it would turn against “the poor” in an instant, just as it was against them through so many centuries.

Paglia said in February 2015 that Romero would be beatified in San Salvador “certainly within the year and not later, but possibly within a few months”.  He said that the two decades it took to obtain the decree were the result of “misunderstandings and preconceptions”, because during the time Romero had been archbishop of San Salvador (1977 to 1980), “kilos of letters against him arrived in Rome.  The accusations were simple: he’s political; he’s a follower of liberation theology.”[15]  Correct on both charges! And how did this current archbishop/liberation theologian answer the accusation that Romero supported liberation theology?  Without batting an eyelid, so confident was he that times had changed so much that being a supporter of liberation theology is now seen by millions as perfectly acceptable, indeed right and just.  He replied: “Yes, certainly [Romero supported liberation theology].  But there are two theologies of liberation: one sees liberation only as material liberation; that other is that of Paul VI.  I’m with Paul VI” (meaning he was with Paul VI in seeking both material and spiritual liberation of the people including from injustice and oppression).  A nice distinction, certainly; but considering that Pope Paul VI was a Marxist, and supportive of the Soviet Union, his interest in seeking “spiritual liberation” in addition to “material liberation” was a farce.  The Roman Papacy is always about earthly power, creating a kingdom of this world.  Not that Rome can offer true spiritual freedom from sin anyway, for it is a false religion.