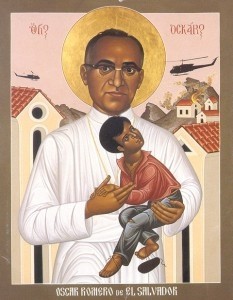 After his murder he was hailed within days, throughout Latin America and elsewhere, as “Saint Romero of the Americas”.[6]  This was unofficial, of course, but he became perhaps the most powerful rallying point for advocates of liberation theology everywhere, the symbol of the Latin American Marxist/liberation theology revolution; a martyr for Rome.  He inspired the Marxist radicalism of a great many other Latin American priests and bishops, as well as those in Africa and Asia.

In 1982, a gathering of 250 Brazilian bishops endorsed Romero’s questioning (in true Marxist style) of “the right to property”.  This was a massive swing to the Communist side by Latin America’s powerful Roman Catholic hierarchy, and it was music to the ears of the millions of poverty-stricken squatters living in derelict shanty towns on the outskirts of Brazil’s cities.  As far as they were concerned, such words from their bishops were nothing less than an incitement to rise up against the established order in a violent revolution.[7]

Continuing with their Communist rant, these bishops at the gathering blamed the social upheavals in their continent, not on those rebellious Marxists actually causing it, but on the economic fabric “which forces many to work for a miserable wage, while maintaining the privileges of the few.”  Lenin could hardly have said it better.

Truly Rome lost nothing, and gained much, from the murder of Oscar Romero.  He had been valuable to the Jesuits and other liberation theologians while alive; he was far more valuable to them dead.  For they were able to turn him into a martyr for the cause, a man who supposedly laid down his life to “liberate” the poor and downtrodden of the vast Roman Catholic continent of South America.

Yet Romero, despite all the “good” he did, both alive and dead, for Rome, and despite being hailed almost immediately, unofficially, as “Saint Romero”, was not in fact placed on the path to official “sainthood” by the pope at the time, John Paul II, even though millions wanted him to be.  Why not?

The reason was because John Paul II, although an advocate of “Catholic-Communism” himself, had to tread very carefully at the time so as not to offend the United States of America.  For there was a secret alliance between the Vatican and Washington, forged for the purpose of thwarting Moscow’s expansionist ambitions worldwide.  Washington was supporting, indeed propping up, various non-Communist governments in South America at the time, some of them very dictatorial and cruel.  It was doing this so as to prevent Moscow making further headway in that volatile continent, the countries of which always seemed to be either on the brink of revolution or actually caught up in one.  The following is taken from my article, The Jesuit Roman Pope Francis I: “[John Paul II] was anti-Soviet Marxism, but pro-Roman Catholic Marxism; in other words, he supported a brand of Marxism controlled from the Vatican, not Moscow.  He was also a pro-Washington pope.  In Latin America the Jesuits were up to their dog-collared necks in promoting the radical Catholic-Communist teaching known as liberation theology.  John Paul II was not against liberation theology, but his American backers – namely, the Reagan Administration – wanted him to put the brakes on the Jesuits’ violent and bloodthirsty liberation theology activities in Latin America, because their huge support for Marxist revolutions on that continent was a threat to Washington’s own interests and plans.”[8]