The Jesuit Roman pope, Francis I, is going out of his way – in accordance with the instructions he has received from the Jesuit general, his superior – to promote ecumenism between Romanism and Protestantism; and he has been especially active, more so even than John Paul II, in seeking with great cunning and subtlety to woo those within the Pentecostal/Charismatic movement.

I have written about this before.  There was his message, broadcast by Charismatic con-man, Kenneth Copeland.[1]  Then there was his meeting, held in the Vatican, with a delegation of Charismatic and “Evangelical” leaders.[2] 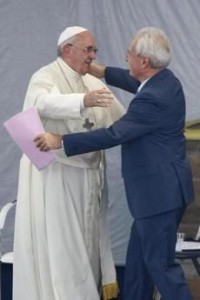 And then in July he travelled to Caserta, in southern Italy, and had a private meeting with a Pentecostal pastor and old friend from their days in Buenos Aires, Giovanni Traettino.[3]  And after meeting with him, Francis paid a surprise visit to a Pentecostal church in Caserta, called the Evangelical Church of Reconciliation, where he gave a speech to some 200 Pentecostals from Italy, the USA, and Argentina.[4]

This was ground-breaking enough.

But then things got really interesting.

In his speech, Francis asked for forgiveness from Pentecostals, apologising for Roman Catholics who persecuted Pentecostals in the past, and called for ecumenical dialogue to continue, and for “unity in diversity”![5]