During his evening prayer address, Williams said: “Christians in Britain, especially in England, look back with the most fervent gratitude to the events of 597, when Augustine landed on these shores to preach the gospel to the Anglo-Saxons at the behest of Pope St Gregory the Great.”  But Augustine was not a true Christian, he was a violent and wicked man, an ambassador not of Christ but of the pope of Rome!  Yet Williams praised him and Gregory who sent him.  Going on, Williams sunk even lower: “For Christians of all traditions and confessions, St Gregory is a figure of compelling attractiveness and spiritual authority – pastor and leader, scholar and exegete and spiritual guide.”  Yet what does history actually reveal of this Roman pontiff of “compelling attractiveness”, and of his servant Augustine?  The following extracts are from the book, The Story of the Light that Never Went Out:

“Gregory the Great was a most ambitious pope; nothing but the conquest of the world to Rome would satisfy him.”  “Gregory the Great had chosen the right man to accomplish this work; Augustine was as ambitious as he was to see the world brought under the sway of the fast developing kingdom of papal Rome…. Gregory despatched more missionaries [to England], and loaded them with vestments and church ornaments, and a quantity of rags and bones – supposed to be the relics of saints and martyrs, to which the increasing superstition of the times attributed many absurd and fabulous miracles.  With these relics Augustine might hope to overawe and vanquish the English!”  And when the professing church in Britain refused to submit to the authority of the Roman pontiff, Augustine said to them: “if you will not receive brethren who bring you peace, you shall receive enemies who will bring you war.  If you will not unite with us in showing the Saxon the way of life, you shall receive from them the stroke of death.”[30]  And the military power of Rome was used to subdue England by bloodshed.

These were the men – Gregory and Augustine – whom Williams praised so highly in his address to the Roman Antichrist!  But he was not done; he had to sink lower still.  He said: “The fact that the first preaching of the Gospel to the English peoples in the sixth and seventh centuries has its origins in his [Gregory’s] vision creates a special connection for us with the See of the Apostles Peter and Paul; and Gregory’s witness and legacy remain an immensely fruitful source of inspiration for our own mission in these dramatically different times.”  Williams should have brushed up on his history (or was it a deliberate smokescreen again?): the Gospel reached Britain long before Gregory ever sent Augustine to that land.  But by saying this Williams gave the impression that Britain has Popery to thank for the arrival of the “Gospel”!  Plus, he referred to Rome as “the See of the Apostles Peter and Paul” – another historical inaccuracy as Peter was never actually in Rome, and Paul never had a “See” there.  Once again Williams was pointing out the special, unique role of the Roman pontiff over all Christendom, by virtue of being, supposedly, the “successor of Peter” – a great falsehood.

Williams then went on to praise the life and work of the evil Roman Catholic “saint”, Benedict, founder of the Benedictine order of monks, and the man whose name Joseph Ratzinger chose for himself when he became the Roman pope, Benedict XVI.  Williams said British culture had tragically lost sight of that original Benedict’s “vision”, but that the present Benedict had made a huge “contribution to a Benedictine vision for our days”. 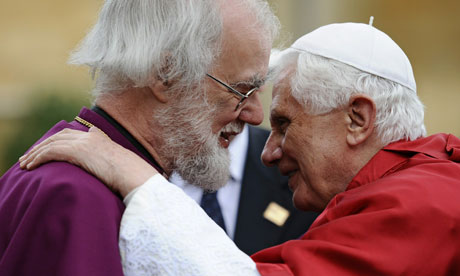