Williams: Simply a Naive Puppet Dancing to Rome’s Tune… or Something More?

Worsnip ended his article with these words: “[Rowan Williams] is not past leading innocent theology students down the slippery slope of ‘unknowing’ by pointing them in the direction of heretics of the church and with impunity!  And this, because he does not claim to know any answers about God at all, save that he does not know them.  And that,” the heretic Worsnip concluded, “makes a very pleasant change.”

A man appointed to be the spiritual head of tens of millions of souls worldwide, and yet he did not claim to know any answers about God at all?  How utterly tragic, not only for Rowan Williams personally but for those millions under his supposed “pastoral” care.  But there is another possibility.  Yes, he may indeed be a man with no answers, no absolutes, floundering in a theological “soup” of druid paganism, Eastern Orthodox heresy, Papist Mariolatry, and Anglican doctrinal confusion, as clueless as the “mixed multitude” he led along the broad way that leads to destruction.  But… what if he was a man who knew exactly what he was doing, in true Jesuitical fashion? 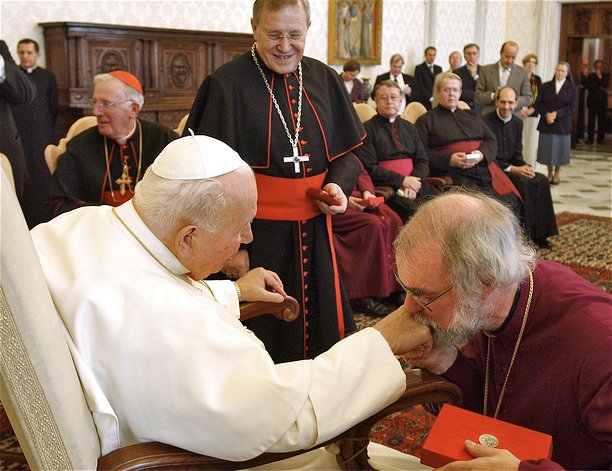 The Papacy has worked for 400 years to undermine and destroy the “Church of England.”  Jesuit secret agents of the pope have throughout all this time infiltrated this institution and risen to hold high positions within its hierarchy, in order to lead it into ever-deeper confusion and ultimately lay its wasted form at the feet of the pope of Rome.[22]  When the Anglican institution took the decision to ordain women to the priesthood, large numbers of disillusioned Anglicans flocked to Rome.  With every passing year its numbers decline, its influence wanes even further, and increasing numbers of “traditional” Anglicans, now more Anglo-Catholic than ever before, look with longing eyes towards Rome as the answer.  Tired of the rot within the “Church of England”, the rudderless leadership, the doctrinal confusion, and conditioned over many years to believe that the break with Rome in the sixteenth century should never have happened, they are feeling that the only answer is to convert to Romanism.  It is extremely significant that under Williams’ term of office as archbishop, the pope of Rome, Benedict XVI, took a huge step towards bringing about the eventual complete destruction of the Anglican institution when he created a specific ordinariate within the Romish system to accommodate unhappy Anglicans who wanted to convert to Rome.[23]  When this was established, it immediately began to attract numbers of discontent Anglicans, thereby further weakening the Anglican institution.  Williams was sidelined and undermined by the Vatican’s plan,[24] and he criticised what the Papacy was doing;[25] but he could do nothing to stop it, and failed to see that his and his predecessor’s policies had paved the way for this papal onslaught on the Anglican citadel.

Or… perhaps he knew exactly what was happening, and secretly approved!

Could it be that Rowan Williams was deliberately advanced within the Anglican hierarchy at this time in history, to preside over the further terminal decline of the “Church of England”?  Certainly he wanted Anglican unity with Rome and worked for it.[26]  Just as certainly, his appointment as archbishop of Canterbury was greeted with joy in Roman Catholic circles.[27]  Was he a naive puppet of the Jesuit powers at work behind the See of Canterbury, or was he in fact a knowing and active agent of that Order?  We do not know.  But knowing all these facts about Williams, would we be surprised if one day it turned out that he was indeed an agent of the pope of Rome?  Not in the least.

Just to rub Anglican noses in the dirt of humiliation even further, Benedict in 2010 made a triumphant visit to the United Kingdom, a visit of immense significance that showed to all the world just how weak and ineffectual the Anglican institution now was, and how powerful Roman Catholicism was becoming in the territory once ruled by the “Church of England.”  As I wrote in an article at the time, Benedict used the occasion “to constantly push the theme of Britain’s Roman Catholic past, and of the need to revive that ancient faith so as to combat secularism and atheism in society.”[28]  This, too, occurred during Rowan Williams’ term as archbishop of Canterbury.  The following is taken from that article:

On the second day of his visit to the UK Benedict met with Williams.  Showing Williams’ utter blindness to the true Gospel, he and Benedict “affirmed the need to proclaim the Gospel message of salvation in Jesus Christ, both in a reasoned and convincing way in the contemporary context of profound cultural and social transformation, and in lives of holiness and transparency to God,” said the communiqué released after the event.[29]  What “gospel” does the Papacy proclaim?  And what holiness is lived by a man such as Benedict or any of his minions?  Roman Catholicism preaches an entirely false “gospel” of salvation by man’s own works, a devilish lie that has damned multiplied millions to hell.  As for “holiness”, what is holy about a religion which has abused children on a massive scale; which finances and supports revolutions around the world; which has massacred multiplied millions of people through the centuries; which is filled with every vice and every filthy and abominable deed? (Rev. 9:20,21; 18:2).  But Williams could affirm this joint communiqué with Benedict because birds of a feather flock together!  Anglicanism is a spiritual harlot daughter of the Mother Whore of Rome.  It, too, proclaims a false “gospel” of the lie of baptismal regeneration, of Anglo-Catholic works-salvation via ritual, and it too is an unholy, ungodly mixture that is an abomination in the eyes of the Lord.  This is not a time for mincing words.  The truth must be told.  Like mother, like daughter.

During the meeting, the two men spoke of the importance of improved ecumenical relations.  What a joke.  Rome is not interested in “unity” with Anglicanism, only in absorbing Anglicanism – and it is well on the way to doing precisely that.  Rome makes all the right noises, but the truth is that Anglicanism is pretty much finished.  It is on its way out.  A triumphant Papacy is marching across Anglicanism’s home turf, and there is nothing, nothing whatsoever, that Canterbury can do about it.  It is too late.

But it did not stop there.