The Arch-Druid of Canterbury, PDF format

In late 2012 Rowan Williams, the Anglican archbishop of Canterbury, announced that he would be retiring, after a decade at the helm as spiritual leader of the world’s Anglicans (numbering something like 85 million souls).  Anglicanism was in an appalling state long before Williams took over, but under his leadership it sunk to greater lows than ever.  To call the Anglican institution a true Christian church is to utter a falsehood, and that there are men, professing to be Christians and evangelicals, who actually do so, is disgraceful.  It cannot, by any stretch of the imagination, be accepted as a church.  It is an utterly false religious institution masquerading as a Christian church, just like its mother, the Roman Catholic institution (Rev. 17:5).

Let us consider this man’s beliefs and his shocking legacy, as well as the state of the religious institution over which he presided.  When he was first appointed in 2002, I wrote an article about him in The Bible Based Ministries Magazine,[1] which, although used as the basis for this present article, has been greatly expanded with the inclusion of much additional material.

The Appalling State of the Religious Monstrosity Known as Anglicanism

The Anglican institution has never been a true Christian church.  Its heretical doctrine of baptismal regeneration, its alliance with the State, its very birth under the wicked King Henry VIII, its persecuting spirit, and its unbiblical hierarchical priesthood, among many other things, saw to that.  From the very beginning, it was nothing but a harlot daughter of its Roman Mother (Rev.17:5).  It did not bear the scriptural marks of a true church of Christ, and did not deserve the name of one.

In recent decades, however, as the Rome-controlled ecumenical movement has gained momentum, and as the Jesuit desire for the subjugation of the “Church of England” to the pope of Rome has proceeded apace, the Anglican institution has sunk to even greater depths.   It is far, far worse today than it was even just a few decades ago – and it was very bad back then.  Its modern freefall is easy to document, for it has been very public and scandalous: we can see it plainly in such things as its co-operation, interaction, fellowship with and acceptance of the Papal system; its ordination of women as priests (priestesses in reality, although they do not refer to themselves as such, for this has an even more heathenish ring to it than when it only had priests, as bad as that was!); its acceptance of sodomy and even the ordination of sodomites to the priesthood; its vast financial support for Communist terrorist organisations; the rejection by an increasing number of its leaders of even the most fundamental Christian doctrines – including the Trinity, the virgin birth of the Lord Jesus Christ, His bodily resurrection, His divine Sonship, the reality of an eternal hell for the damned, etc.; and so much more.  A survey held in 2002, consisting of questions sent to some 2000 Anglican priests and priestesses, revealed that many Anglican pulpits were occupied by people who rejected basic biblical truth: only three in ten priestesses and six in ten  priests believed in the virgin birth of the Lord Jesus Christ; and only half of all priestesses and seven in ten priests believed in the physical resurrection of Christ.  The findings also suggested that Anglican “clergy” (so-called) did not actually believe 75% of what they preach on Sundays.[2]

Many wonder just how far Anglicanism will sink.  Well, the ultimate degradation will be its complete disintegration, and the absorption of what is left of the worldwide Anglican movement into the Roman Papacy’s fold.  In preparation for that, the destruction of Anglicanism proceeds apace.  And after the appointment of Rowan Williams as the new archbishop of Canterbury in December 2002, no true Christian has any reason to ever be surprised by anything emanating from this heathen institution masquerading as a church of Christ.

For the new archbishop of Canterbury was, openly and unashamedly, a pagan druid priest!

Almost Beyond Belief: a Druid Priest Becomes Archbishop of Canterbury! 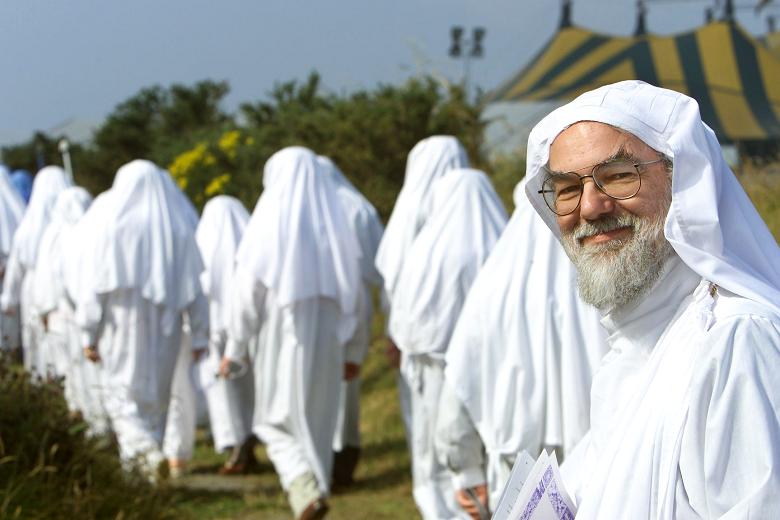